ULFA behind Sonari shoot out!

The shoot out in Sonari on Friday is believed to be handiwork of ULFA where the militants attacked a local trader for refusing to pay ransom.

According to information, the militants served him extortion notice and threatened him of dire consequences.

Identified as Golap Lunawat, the local trader in Sonari was killed hours after miscreants sprayed several rounds of bullets on his womb on Friday evening.

He breathed his last at 8-30 in the evening two hours after he was rushed to the Aditya Hospital. 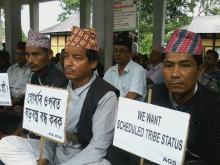