No more a safe refuge

Erratic weather, floods and drought in the Himalayan foothills and a change in course of the river after the great earthquake of 1950, forced a group of people in the Murkongchelek area-- bordering Arunachal Pradesh-- to seek their fortune elsewhere. These agrarian people, belonging to the Mishing community, prefer to live by riverside as their occupations are directly related to the river. They crossed the Brahmaputra to settle on its southern bank and came upon an abode of nature surrounded by six rivers--Lohit, Dibang and Disang on the north and Anantanala, Dangori and Dibru on the south. A refuge for some rare and endagered wildlife, Dibru Saikhowa, on the Brahmaputra flood plain soon became the ideal refuge for these climate-hit people, once forced to leave home owing to the vagaries of nature. Climate change, thus, turned an agrarian community dependent on farming and fishing, into a forest dwelling community. The 165 families spread out inside the protected area as forest villages--Laika and Dadhia-- in an area of 3.73 sq km.

However, the safe refuge no longer remained safer-- neither for the forest dwellers nor for the Park inmates.

Located in the easternmost tip of Assam, Northeast India, Dibru Saikhowa National Park is a unique abode that shelters wide ranging flora and fauna. Spreading across the twin districts of Dibrugarh and Tinsukia, the Park had an original notified area of 340 square km which now stands at 242.7 square km owing to erosion and expanding human habitations in its core area. Availability for effective wildlife habitat is even lower as 48.2 square km of the core area is occupied by these villages. Laika and Dadhia -- the two original villages from the 1950s had swollen over time to become six villages now-- with over 2,600 families. However, it is not the shrinkage in area of the Park alone that is a cause of concern, rather it is the plight of a group of river people caught in the perils of climate change who were forced an isolated and controversial existence after their fate had been sealed when Dibru Saikhowa was declared a national park in 1999. 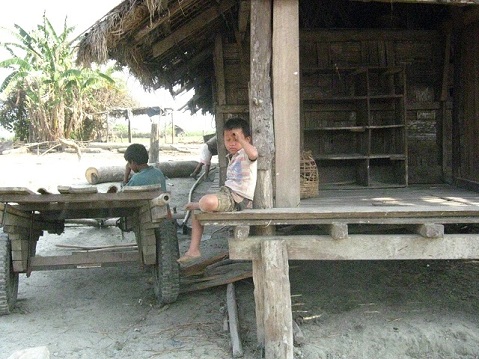 Reckoned as a rich wildlife habitat and a haven of rare avian population-- both endemic and migratory--Dibru Saikhowa won its first recognition as a wildlife sanctuary in 1986.With the passage of time the Park earned for itself a name as a popular destination for tourists and birdwatchers and soon Dibru Saikhowa was accorded the National Park status in 1999. While the conservationist community hailed the declaration of Dibru Saikhowa as a National Park, the decision only jeopardised the condition of a couple of thousand  families further aggravating the situation inside the park.

"I wonder how the government could be so inconsiderate.  Our views were never taken into consideration before the decision was made. The government should have made proper arrangements for relocating these forest villages before declaring Dibru Saikhowa a National Park", a distressed J Lagasu, the village headman, said. 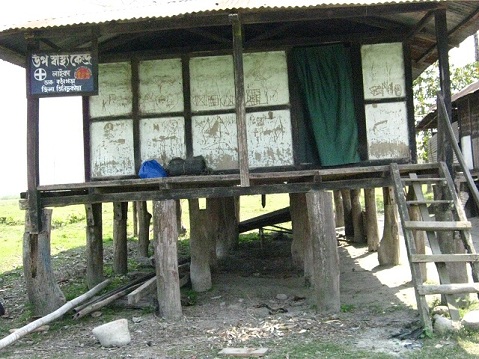 In normal circumstances, the core zone of a national park is always free from human interference. Dibru Saikhowa is perhaps the only exception in the whole country where there are more than 2,600 families.

"It is a mystery as to why the authorities made a hasty decision ignoring the existence of such a large human settlement in the core zone of the Park. As a fallout of this decision, there has been largescale deforestation and spurt in illegal activities inimical to the conservation practices. Large stretches of the available habitat were degraded because of grazing of livestock from these villages, " said Gunadhar Konwar, honorary wildlife warden.

The irony lies in the fact that Dibru Saikhowa has another tag--the tag of biosphere reserve. A biosphere reserve with almost six villages in the core area! There cannot be a more unique example of how the MoEF is compromising with the very basis of conservation.

A commensurate rehabilitation package for these forest dwellers is a colossal task. All the earlier attempts to shift this population has failed grossly due to a lack of consensus among the villagers. However, that scenario has changed. The onus is now on the forest department.

"We want to move out of here, the sooner the better. I am the third generation and I don't want the next generation to go through all the strife that we had to undergo in order to survive. Imagine, a life without even the basic amenities. There is no provision for the minimum healthcare facilities or drinking water. Our children have to walk for miles and then cross the river for a school! Electricity or a motorable road in the core area of a Park is unthinkable. We don't even have the basic human rights. We are like a marooned people cut off from the rest of the world. Not to talk of TV, we hardly have the glimpse of a newspaper," a frustrated Lagasu went on as we climbed the ladders to the raised platform of his house at Laika village.

In that March afternoon on way to Lagasu's dwelling, I could feel the scorching sun and looked for some shade but there are no big trees to be seen for miles. This is indeed a grim picture for a National Park! 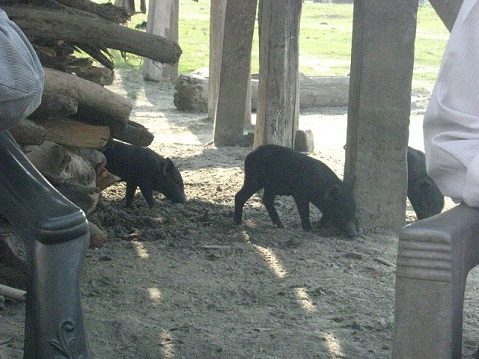 The main subsistence activities for these people are animal husbandry, fishing and a little farming but lack of reliable water sources is affecting their lives in many ways. Deficit rainfall  and a prolonged dry spell compels the women folk  to walk longer routes to the sources of water.

While healthcare is as good as non-existent for these villagers, they also lack the most fundamental of human needs--clean water and sanitation. The water the villagers use for drinking is from a hand pump that has an awful smell.

During the monsoon, these villages remain under water for months and the villagers depend entirely on the government supplied relief materials. Humans and pigs share the same shelter on those awful days. The women had to undergo an ordeal when they are menstruating during the floods and the post-flood days-- amid the mud, slush and filth!

I didn't notice even a hole in the ground that may be termed as a toilet!

"You see these pigs around!"  Gunadhar Konwar revealed a secret--"these animals eat up the biological waste. You only need a stick in your hand when you go out in the morning!"

Permalink Submitted by Jayanta Kumar Das on Mon, 12/05/2014 - 17:57
Well written real story of hundred trapped people in between reality and red tapism . Government of Assam miserabily failed to rehabilitate these Missing people who had offered to comeput of the Dibru Saikhowa NP since long back in the interest of flora and fauna of the NP

3 May 2011 - 2:09am | editor
A woman committed suicide by consuming pesticide after a petty quarrel with her husband on Monday at Wabagai Kadajit under Kakching police station in Thoubal district, police here said today...