A hardcore terrorist of NDFB (Songbijit faction) was killed and two others were apprehended in Parbatjhora subdivision of Kokrajhar district on Sunday in a joint operation by Army of Red Horns Division and Assam Police.

Based on tiptop information about presence of 5-6 NDFB terrorists near Gopaljhora village under Bagribari police station in Kokrajhar, Army camp Basbari launched a joint search operation in the area along with Kokrajhar police at 2.30 pm on Sunday when incessant fire from a jungle and saw 7-8 suspected terrorists running away. In a controlled retaliatory fire by security forces, one terrorist was injured who was later declared brought dead by Kokrajhar Rup Nath civil hospital and other two cadres were arrested.The identity of the deceased terrorist is being ascertained by police.

21 Jan 2013 - 7:16pm | editor
The Electronic Media Forum Assam (EMFA) has organized a press meet on January 25 to brief the reporters about the 3rd EMFA Media Awards 2012 scheduled for next month. The press meet, which will be... 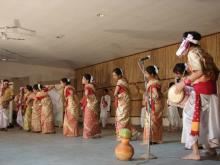 6 Apr 2009 - 11:04pm | editor
The students of Assam of the Indian Institute of Technology (I.I.T.) Guwahati performed Bihu Husori in a function ‘Bohagor Duwardolit’ (a get-together of the student of Assam at IIT...