Dam in Bhutan to spell danger in Assam

Narendra Modi’s green signal to Bhutan over the construction of big dams in the Himalayan kingdom generated anger and protest across Assam.

Various political parties, organizations and individual have vehemently criticized the prime minister for his nod in Bhutan to construct the big dam that posing a serious threat to the downstream areas.

A number of organizations operating in lower Assam have called it a devastating step that can wash away a huge portion of Barpeta and Nalbari districts.

CPI-ML strongly slammed the prime minister alleging that Modi has gone back to his pre poll words.

Talking to Assam Times, party leaders said,” during his poll campaign, Modi assured Assam of safety and security but only to be ignored. How he would ensure security if he allows Kurichu dam that conveys an impending danger.”

9 May 2014 - 11:48am | AT News
The mysterious death of a doctor at her duty room in the Assam Medical College Hospital oozes no less shock and sensation in Dibrugarh on Friday.Identified as Dr Sarita Toshniwal from first year post... 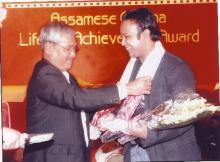 2 Feb 2018 - 12:11pm | AT News
KOKRAJHAR: Wait a little bit. A new Bodo feature film will hit the screens by July this year. Courtesy  RB productions. The Kokrajhar based production house organized the Muhrut with lots of...