Stress on uplift of Assam tea in General Meeting of Tea Planters body.

Our Jorhat Correspondent: A set of draconian laws are there to prevent the 100 year long tea industry from flourishing in Assam, says the Assam Tea Planters’ Association President Raj Baruah.

Addressing the 70th annual general meeting of the tea planters’ body, at the Jorhat Gymkhana Club on Saturday, Mr Baruah said a tea estate owner should be free from all statutory liabilities for availing the benefits under the Special Purpose Tea Fund for the rejuvenation and replantation of tea bushes.
Mr Baruah stressed on the need to amend the relevant sections of the Plantation Labour Act to provide relief to the tea industry and urged the Government to ensure that there was no dislocation in distribution under the new public distribution system introduced in the tea estates from June this year. He urged the Government to ensure that small and medium-sized gardens are not deprived of the loans available under the SPTF as this sector needs the benefits the most.

Mr Baruah in his address further stressed the need of an early implementation of the proposed e-auction process initiated by the Tea Board to ensure fair price recovery. He maintained that the Centre and the State Government should share the social costs borne by the organized tea sector in the State,

Saying that reforms in the power sector is necessary to cut down transmission and distribution losses, the ATPA president says permission to use natural flavours in tea, exemption from the levy of cess on green tea leaves and a waiver on the payment of agricultural income tax for at least a few years should be looked into.

In his address as the Chief Guest, Chief Economic Adviser to the Union Government Ashok Lahiri says tea quality should be upgraded as the country needs a highly differentiated product to compete in the global market.

According to him, the Indian tea sector, particularly Assam tea, should follow the example set by Brazil which has been able to maintain its overwhelming superiority as the largest exporter of coffee while achieving manifold increase in its domestic consumption 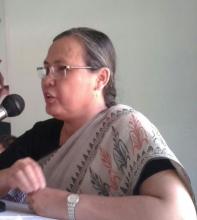 24 Jan 2012 - 3:51am | editor
In yet another sensational case, a 27-year-youth from Assam committed suicide in Bangalore. His brother also has been charged with attempting to commit suicide in the same city on Sunday. Both...

28 May 2010 - 11:36am | Jayanta Kumar Das
The suspected death of a 12-years-old wild elephant in the night of May 25 in Bhutiachag TE in Udalguri district has been condoled by nature lovers of the district. The dead elephant was found...