Rijiju reviewed the law and order situation along the inter state border with Gogoi before talking to TR Zeliang who apprised him of the situation prevailing in Nagaland. A joint statement is expected anytime from now.

Rijiju prepared his Guwahati schedule suddenly on Wednesday night hours after chief minister Tarun Gogoi criticized him for not visiting the state.

The chief minister duo are likely to come out with a joint statement after the end of the meeting in the afternoon.

On Wednesday, Union home minister Rajnath Singh asked Gogoi and Zeliang to hold talks on the issue and sign an joint statement on Thursday.

12 Apr 2015 - 11:03am | AT News
The 24 hour Karbi Anglong bandh ended on Sunday morning crippling normal life across the hills district during the last 24 hours.Called by at least 10 local Karbi organizations, the band ended...

Extension of Hill Queen up to Silchar opposed 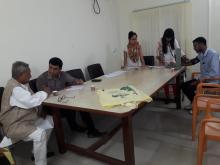 Evening with a Doctor in GPC

10 Dec 2016 - 9:28am | AT News
More healthcare institutions have been roped by Guwahati Press Club {GPC} for its ‘Evening with a Doctor’ programs on every Saturday for the benefit of its member-journalists along with their...