BTC executive member for handloom and textile department Banamali Boro, giving reply to the question of   Kartick Chandra Boro, said that the supply of yarn made during 2012-13 & 2013-14 were received in proper requisite condition and disbursed the same to each Council member of Udalguri district. He said during disbursement no complaint were established and till now no further complaint from the beneficiaries has been lodged to the concern department. He said that his department was working for the enhancement of handloom and textile in the council.

Derhasat Basumatary, executive member for education department while relying to a question by council member Prodeep Kumar Daimary said that the BTC administration has not framed its own rule to give appointment of Santhali and Nepali language teachers in Higher Secondary schools in the council. The council running the concern status under the act and rules framed by the government of state government which is being adopted and enforced, he added.

Deben Boro, executive member for PHE department informed the house that there are 237 PHE projects under taken in Udalguri district, of which 153 projects come out successfully, besides 23 are distributing waters among publics and remaining 61 projects are on progress.

Mitharam Basumatary, executive member for Agriculture department said that council has decided to distribute 63 Power Tiller among beneficiaries under 2014-15 sessions for the benefit of the farmers.

The winter session is the last session of the present Hagrama Mohilary led BPF government in the BTC as the election to the 40 member BTC election is expected to be held in end March next.

Several members including BTC Chief Hagrama Mohilary,MCLA Rabiram Narzary were not present on the session.

Speaker Paniram Brahma thanked all members of the council including the Council Chief, Deputy Chief, executive members, MCLAs for extending kind co-operation in conducting the session on smooth manner in the last five years in his chair and hoped that integration of council will highlight in future.

The session also observed a one minute silence over demise of noted sculptor Haribhusan Brahma of Gossaigaon and prayed for his eternal peace.

8 Jun 2012 - 11:35pm | editor
Security forces arrested five UNLF militants from Jorabat area in the city on Friday. The militants were travelling in a car from Aizawl in Mizoram to Guwahati when the police and CRPF personnel...

14 Nov 2015 - 5:00am | AT News
After losing the opening three games, few would have expected NorthEast United FC to be in contention for a top 4 spot at the business end of the Indian Super League. However, the side led by Cesar... 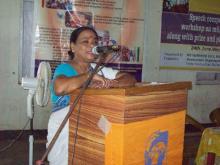 1 Jul 2009 - 12:54am | editor
In connection of the above 12 small farmers participated in a speech competition on the topic “Need of mushroom in the formation of farmers’ federation” they gathered from 10...