An awareness meeting on implementation of updation for National Register of Citizens (NRC) was held on Monday at DC office conference hall with PK Bhagawati, Kokrajhar ADC and In-charge of NRC in the chair in the district.

The meeting discussed about smooth functioning of updation of NRC across the district involving designated officer and rsource persons to make speedy up of the updation works.

The state government deployed 97 Local Registrar of Citizen Registration (LRCR) officers at various areas to look after the NRC updation under five circles- Bagribari, Gossaigaon, Bhawraguri, Dotma and Kokrajhar, besides deployment of 15 officials to make speedy up of updation works in the district,PK Bhagawati, ADC.

The works of the updation of NRC is going in full swing in the district as per instruction reached from Supreme Court of India and engaged officials are performing all related jobs timely.The publication of records like search/looking up of linkage by public would completed by February,receipt of applications would be ended in May beginning from March,verification will begin from June and completed by September,draft publication will be done first October,receipt of claims & objections will be done October,disposal of claims & objections will be completed in November and December,2015 and the finalisation of final updated NRC would be announced first January of 2016 next, Bhagawati told.

Among others,AA Shaek,district resource person, Gitanjali Das,district project supervisor of NRC updation were present and shared about early implementation of NRC in the district.

10 Dec 2014 - 8:04pm | AT News
The recent death of Tussar Yadav inside IIT-Guwahati campus seems to have shrouded in mystery. The IITian’s parents have alleged it a murder case and that they are unhappy with the police...

16 Jul 2012 - 3:03am | editor
Braving incessant rains that lashed the city for several hours, hundreds of people in Guwahati, took out a huge procession to show register their protest and anger against the role of government,... 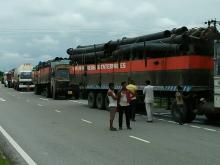 Road communication disrupted due to bandh

13 Jun 2017 - 8:09pm | AT Kokrajhar Bureau
Road communication was disrupted since Monday along the 31(C) National Highway at Karigaon in Kokrajhar district due to 36-hour Assam bandh called by Pradip Ray faction of AKRSU demanding creation of...