Talking to reporters in Kokrajhar after Dr Sarma confirmed his decision, the BPF president said that the party had nothing to support to oppose Dr Sarma since they were no longer with the ruling party. 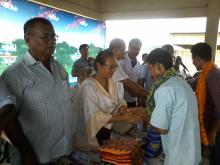 5 Jun 2016 - 10:09pm | Rituraj Phukan
The World Environment Day was observed centrally by the Pollution Control Board & the forest department in collaboration with Green Guard Nature Organization at the Kamala Devi Todi Smriti Bhawan...

29 Aug 2012 - 2:51am | editor
Chief Minister Tarun Gogoi on Tuesday appeal to the political parties and organizations to refrain from calling bandhs saying that these wont help the matters. Addressing a press conference in...