ULFa has killed a gaonburah in lower Assam’s Udalguri disitrct on Sunday afternoon.. According to information, the goanburah of Dolongghat Khagendranath Deka was shot dead at Bhakatgaon by two motorcycle born youths. Later ULFA’s 27 Battalion has owned up the responsibility. High level police officials arrived on the spot later on and investigation is going on. 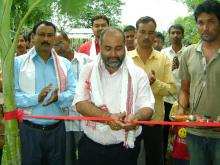 4 May 2009 - 12:30am | Mowsam Hazarika
Goonj, a Delhi based NGO, has been trying to meet up a most essential basic needs for the thousand of toil human from its inception throughout the country. The organisation collects any types of...

5 Mar 2009 - 8:48pm | editor
A suspected ILFA cadre and a civilian died in two separate incidents of firing at the Bhoiratoli village under Hajo police station on Wednesday night.According to information, two suspected ULFA...