The golden jubilee celebration of Sekhar Sankardeb Mission HS School concluded at Dimakuchi in Udalguri district on October 31 with fanfare and gaiety. The inauguration of newly constructed school main gate marked the begining of the three days celebration at 8 am on October 29 followed by numbers of events including a workshop on basic astronomy and sky observation on October 30. The workshop was conducted by UN Deka, Secretary,Pragjyotish Amateur Astronomer's Association, Guwahati Planetarium and Sewali Kalita of DDK,Guwahati. More than three hundred students took part in the workshop and had interactive sessions with astronomers and scientists.

Another workshop was held at the same day on 'Duties and responsibilities of parents and teachers in present day' where both parents and teachers could exchange their views on changing present day education system.The workshop which was held at 1 pm was conducted by Nabin Chandra Boro,Inspector of Schools,Udalguri;Jwnsrang Boro, Speaker, ABSTGA and Romeo P Narzari,Vice President ABSU.

The open session was presided over by Gautam Kumar Sarma,President,Golden Jubilee Celebration Committee which was held at 1 pm on October 31.Several distinguished people attended the open session The celebration came to the end with the closing cultural ceremony in the evening of October 31.Thaneswar Malakar,Secretary,Department of Elemenraty Education,Assam Government attended the closing ceremony which was inaugurated by Bonjar Daimari,EM,BTC.

18 Feb 2012 - 11:20pm | Daya Nath Singh
Ubati Riang, a sixty year old lady, who played a major role in bringing Barak valley militants to negotiation table with the government, is disappointed on the role of the state government for...

Entrepreneurship for Innovation in Rural Areas 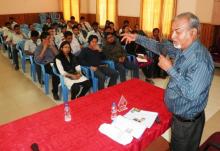 7 Apr 2020 - 7:29pm | AT News
New Delhi: The Supreme Court has issued a notice to the Assam Government and Centre asking for an affidavit on a plea to release the detention camp inmates who have already spent 2 years. Taking...
Follow @Assam Times