The 547th birth anniversary of Guru Nanak, the founder of Sikhism, was celebrated in Tangla along with the rest of India on Wednesday. Special preparations were made for the day in the local gurdwara to celebrate the birth anniversary of the first guru of the Sikh religion, which falls on the day of Kartik Purnima every year. In Tangla the followers of the religion made a beeline to the gurdwaras since morning and took part in langar (community lunch), a tradition started by Guru Nanak to encourage brotherhood and fellow feeling among all sections, irrespective of caste and creed.

12 Feb 2020 - 10:17am | AT News
Basking with the massive win in Delhi the Arvind Kejriwal-led Aam Aadmi Party(AAP) has wished to contest in next Assam assembly elections to be held in 2021. Addressing a press conference on... 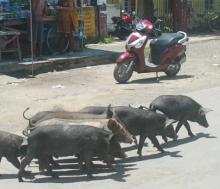 25 Jul 2013 - 6:52pm | SK Hasan
To control the raising terror of Japanise encephalities Nazira civil administration has banned the open farming of pigs at Nazira subdivision. But ignoring the govt. order pigs are openly running in...

Another body fished out from Beki

8 May 2014 - 1:46pm | Jintul Talukdar
One after another bodies seem to have surfaced in BTAD areas a week after it was rocked by a string of violence.Local residents in the worst-hit Narayanguri recovered the body of a minor boy from the...