An escalating resentment over poll pact with AGP and the first of candidates threaten to mar BJP's prospect for the upcoming assembly polls scheduled on April 4 and April 11.

Local BJP leaders and workers have hit the streets in many places opposing the poll pact with the regional party whom they think the people have dumped a decade back.

"We don't understand why the BJP leadership have decided to welcome the regional party which has already lost the base. This is suicidal," said Khagen Bora from Tezpur who is fed up with the party's weakening poll prospect. BJP has left Tezpur to AGP where Brindabon Goswami will contest.

Another BJP worker from Amguri who is dead opposed to the poll alliance with AGP said that the party will have to pay heavy price after the debacle. "The party leadership are to be blamed if BJP loses. We have capable and popular leader in Amguri. Pradeep Hazarika is a known face of failure. Anjan Dutta is groping for popularity. BJP has a chance. But the party has given this vital constituency to AGP. The Congress is trying to strike the advantage," said Bulan Baruah from Amguri.

BJP's poll prospect hits major hurdle when it announced the list of 88 candidates recently where senior leaders, mostly, have been sidelined. In Sadiya many senior BJP leaders failed to find place in the list after the leadership named Balin Chetia whose popularity is declining since he started doing dissidence against Tarun Gogoi.

"A betrayer Chetia who struck no less controversy will do the same if BJP comes to power. There is hardly any logic behind the ticket Chetia which is why, the party will suffer," said Tankeswar Gogoi a BJP worker.

In some places BJP workers hit the streets after the party denied tickets to the sitting party MLAs. Manoranjan Das, who was denied ticket is preparing to contest the polls as independent.

According to political observers if AGP and BJP cannot ignore the protest and resentment both the parties will have to pay heavy price in the polls.

18 Jul 2010 - 9:52pm | Jayanta Kumar Das
The decomposed body of a wild tusker was found at a place called Phuljharbon near section No 21 (A) of Majuli TE under Harisinga Revenue Circle in Udalguri district on July 17.This has the case of...

26 Mar 2009 - 9:47pm | editor
Three days after Anil Majundar was shot dead, city police on Thursday has released the sketch of the gunman urging to the people to help them identify the culprit. According to information, the... 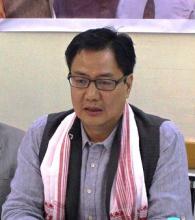