Normal life comes to a grinding halt in the central Assam districts on Monday following a 12 hour long bandh demanding the AIIMS in Raha.
Schools and colleges, shops and markets, banks and offices have been remaining closed since morning when several local organizations enforced the bandh from 6 in the morning.
The surface communication from Guwahati to upper Assam districts has been snapped in view of the dusk to drawn bandh.
Bandh supporters in large numbers thronged the National Highway No 37 in Raha and shouted slogans reiterating the AIIMS in the area.
Notably, Raha was considered as the place for the proposed AIIMS. But the erstwhile Congress Government finalised Changsari in the outskirt of Guwahati as the ideal site. The people of Raha vowed to keep fighting for the state-of-the-art hospital. 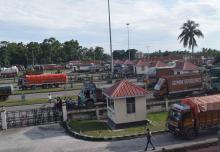 4 Jul 2016 - 10:07pm | AT Kokrajhar Bureau
At a time when the BJP led state government is taking tough measure to uproot the corrupt practices in the state, even though the famous interstate Srirampur check gate in lower Assam is seen to be...

A Christmas of a different kind!

29 Dec 2013 - 9:10pm | Saidul Khan
Christmas may be a religious celebration to mark the birthday of Jesus Christ but it is more than just a one day affair in Meghalaya's Garo Hills. The five district of Garo Hills remains soaked in...