A record rainfall in Guwahati wrecked no less havoc in the premier north eastern city heavily disrupting Eid celebration by the Muslim people on Thursday.

The two and a half hour long heavy downpour that lashed the city in the wee hour resulted in a massive waterlogging in many places where a portion of the busy Guwahati-Shillong Road in Bhangagarh, Christianbasti, was inundated till noon.

Bylanes, mostly, in these areas have remained waterlogged forcing the residents to remain confined to their homes.

The massive waterlogging has resulted in a huge traffic snarls on the vital roads in the city. The district administration has stepped up rescue and relief in the heavily flood areas which include Maniknagar, Jonali by the side of the Zoo Road.

If the situation has hardly hope of any let-up if the rains refuse to halt.

The Muslim people in the city could not perform community Namaz because of the incessant rainfalls in the morning.

10 Aug 2011 - 2:50pm | Anup Biswas
Realizing the sufferings of the common people of the district and to respond appeals from several organizations, the Indigenous People Forum (IPF) called off the 100 hours N C Hills (Dima Hasao)... 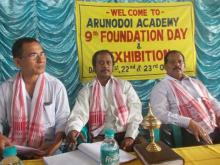