Ajijul,son of Ainal Haque of Salakati Choutaki was kidnapped on June 30 last from Salakati by suspected National Santhali Libeartion Army(NSLA) militant.Family lodged an FIR with police on the next day of the kidnapped and since then police and family members searched where about of Ajijul,but today his body was recovered from digging at Bishmuri Jeetpur jungle area under Kokrajhar PS after 40days of the incident.

Police arrested four cadres of NSLA during the search operation. After revelation of Rajib Baskey,one of kidnappers police and local public able to recover body of Ajijul today on decomposed condition.

Ainal Haque told that his son was kidnapped on June 30 last and later kidnappers demanded 20 lakhs,of which six lakhs paid to kidnappers in the last part of July,but today his son’s body recovered

Police said that police conducted search operation after getting FIR on kidnapped.

Rajib Baskey, arrested kidnapper revealed the incident that they killed Ajijul on July 1 next day of kidnapped.

“We kidnapped Ajijul and demanded ransom to release under guidance of Lahit Murmu,main culprit of the episode.Ajijul was killed on July 1 in this deep jungle area”,Baskey added.

14 Nov 2017 - 4:30pm | AT Kokrajhar Bureau
The death of a homeguard under mysterious circumstance brews no less anger and shock rin Kokrajhar Tuesday. Identified as Hanif Ali (37), he was posted at Bishmuri police outpost who died at a... 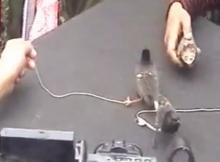 Sea of humanity in Hajo

16 Jan 2015 - 3:11pm | AT News
The bulbul fight is now a thing of the past for Hajo. But the people in the pilgrim town in the outskirt of Guwahati  are not at all worried over it if the magh bihu festivity is any...