The All Assam Students Union(AASU) demanded early implementations of all clauses of historic Assam Accord along with deportation of illegal migrants from Assam.

The students union obsrved Centenary Foundation Day today at Rashmela ground in Kokrajhar district along with rest of the state.

Gambhir Nath,retired principal of Kokrajhar DIET hoisted the Centenary Flag of AASU on the occasion. Nabajyoti Roy,assistant general secretary of AASU(central committee) paid floral tribute to martyrs,who laid their lives for the cause of Assam during agitation.

The Centenary day was observed under the guidance of central committee of AASU across the state to mark the foundation day of formerly Assam Chatra Sanmiloni,now known as All Assam Students Union(AASU) in the state. The Assam Chatra Sanmiloni was founded in 1916(December 25) at Latashil ground in Guwahati to work for the welfare of the state.

Nabajyoti Roy,assistant general secretary of AASU said that the students union recalled contributions of then leader and activists,who had dedicated a lot towards socio-economic development as well educational in the state.He has slammed BJP led NDA government at Centre and allinace government at Dispur for not taking any human welfare activities in the state.

He has dead opposed centre’s move to grant citizenship right to Hindu Bangladeshis in Assam said that the students union never accept anti-citizens’s initiative. He has demanded proper implementation of all clauses of historic Assam Accord and make healthy free from Bangladeshi immigrants. He has warned to take vigorous mass agitation against government if they take initiative to grant citizenship right to Hnidu Bangladeshis in the state.

13 Jan 2015 - 5:32pm | AT News
Bhugali bihu begins on Wednesday. Governor PB Acharya on Tuesday wished the people a very Happy Bhogali or Magh Bihu. In a statement received here on Tuesday, the Governor said the Bihus are the most...

20 May 2014 - 10:02pm | AT News
Hours after Tarun Gogoi left for New Delhi to apprise Sonia Gandhi of the post poll situation, the dissident MLAs and ministers met in Dispur on Tuesday.Led by health minister Dr Himanta Biswa Sarma... 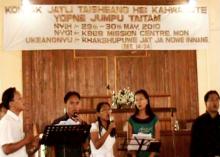