The Science College, Kokrajhar, which is the only pure Science College in BTAD region, has been spotted in 186 raking of top 200 educational institutions across the country that brought appreciation moment in the region.

The collge was founded in 1995 in Kokrajhar,which has a quite discipline with dedicating educational environment for students,which has been spotted in 186 ranking of top 200 of educational institutions across the country. The Ministry of HRD had conducted a survey in the country to check as well highlight quality services and infrastructural aspects in the University and Colleges in all India level in the middle of 2016 last. The Science College, Kokrajhar has been spotted in the survey of the HRD ministry with bringing lauded situation in BTAD as well lower Assam districts, which was declared few days ago.

Principal,student and teaching community of the college expresses their happiness after ranking 186 rank spot in All India rank that surveyed from HRD ministry of Government of India. The college has been dedicated educational services since inception to gain quality education in the region.

‘We are very much lucky enough to be students of this college as the institution has been ranked in top 200 in the country’, said students of the college in an excited moment.

Teachers in the college also expresses their gesture of happuniess over the achieve of ‘All India’ rank that encourged teachers to be more dedicated.

‘It is a good news for the district that Science College able to spot among 200 rank across the nation’, a tecaher of the college.

Dr RN Sinha,Principal of the College expresses his gladness over ranking of 186 spot in ‘All India’ said that the college has been dedicating quality education among students in the region. He said his college is the only pure science college in BTAD as well in lower Assam districts. The college has also recently started PG Physio Therapahy course and decided to launch more PG course from next session, Dr Sinha said.

He has extended thanked to the BTC administration and education department for extending infrastructure in the college.

‘It is a good sign of bringing quality educational development through carrying survey of colleges from HRD ministry across the country.The college’s spotted in top 200 rank has encouraged more to be dedication in educational services’, Dr Sinha added. 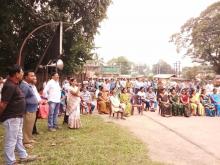 30 Oct 2017 - 1:27pm | Akshaya Pranab Kalita
Uncertainty over the proposed fourth BVFCL unit refuses to die down in Namrup. A huge public gathering on Monday resolved to mount pressure on the government for the plant a couple of days...

In deep grip of Christmas fever

24 Dec 2016 - 8:53pm | AT News
The Christmas festivity grips Assam along with other parts of the globe on Saturday where churches are teeming with people for midnight Carole. Every households of the Christians are getting...

Encroachment killing forest in the state

1 Jul 2019 - 4:00pm | AT News
Vana Mahotsav was started in India in 1950. Keeping in mind the shared inter linkages between forestry and agriculture, the then Union Minister of Agriculture KM Munshi, embarked upon this idea to...