Amid an escalating man-elephant conflict, a huge herd of wild elephants unleashed no less terror in Joypur area in Namrup on Monday.

The elephants who were believed to have come down from the nearby Jeypore Reserved Forest started managed to sneak into Cyko gaon and Panichukia Bongaon before damaging crops, trees and many medicinal plants triggering panic among the local residents.

Then these elephants damaged a massive bamboo plantation patch apart from giving the villagers sleepless nights in Panichukia bongaon. Same fear seems to have gripped the local residents in Namrup Dillighat road  after they cane to see the herd moving with out any hindrence.

Forest guards in the area gave been resorting to blank firing and bursting of fire crackers to disperse these disturbing elephants. But of no avail.

12 Jun 2017 - 1:08pm | AT Staff Reporter
The recovery of the dead bodies of one boy and a girl on railway tracks near Harisinga railway station in Udalguri district on June 12 has created sensation in the district.Police has identified the... 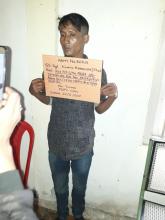 23 Dec 2017 - 1:21am | AT News
MARGHERITA: Despite combing operations and tight vigil Naga rebels have been moving without any hindrance along the Assam-Arunachal Pradesh border unleashing terror by extortion. Security forces on...