The 71st Independence Day of the country has been celebrated at various places in Bhergaon sub-division with gaiety.

At Kalaigaon: Ritottam Bora,AC,Udalguri hoisted the tricolor at Gandhi Bakori playgoound at Kalaigaon in presence of hundreds of people.On the occasion he paid homage to all who had sacrificed for the cause of India's freedom.He specially mentioned name of a few Freedom Fighters of Kalaigaon including late Pani Ram Das and Bongshidhar Sarma who had spend several years term in British prison.March Past and other cultural events were also organized.Three persons namely-Basundhar Deka, Lokeswar Deka.Saru Nath and two students namely Anjana Nath and Seema Sarma were felicitated for their excellence in respective fields. 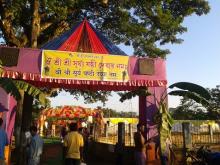 9 Nov 2013 - 9:27am | SK Hasan
The Chhath Puja was celebrate at Nazira with gaity and flavour. Hundreds of pepole of gathered on the bank of the Dikhow river to pray the God Surjya on Friday.

13 Oct 2014 - 8:23am | AT News
Guwahati dresses afresh. The spotlight falls on Sarusajai. A section of footballers is camping in the premier north eastern city for the second ISL football matches begining from Wednesday.The...

2 Aug 2015 - 6:11pm | Hantigiri Narzary
BJP seems to have landed in trouble at least in the Koch Rajbangshi-dominated areas. The Biswajit Roy faction of the All Koch-Rajbongshi Students Union has threatened to ban BJP if it fails to ensure...