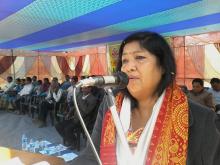 11 Jan 2008 - 12:30pm | editor
The Assam Pollution Control Board chairman has asked the Assam Medical College Hospital and a section of nursing homes to stick to the rules for drainage of waste materials within a week. During his...

23 Jan 2008 - 5:55am | bobbyramakant
A 'jattha' will begin on 26 January 2008 from Nandigram in West Bengal marching and connecting all people's struggles and movements across the states of India to end in Gorai, Mumbai, Maharashtra on...