UDALGURI: The Sikh community of Udalguri and Darrang celebrated the 350th birth anniversary of Sri Guru Gobind Singh with religious fervour at Tangla in Udalguri on Friday.

They celebrated the occasion at the Gurudwara Sri Guru Singh Sabha. Sikh devotees, including women and children, from different parts of the district gathered at the Gurudwara since morning and offered their prayers.Devotees read out the scriptures of Sukhmani Sahib and recited kirtan, which spread the messages of love and harmony among the people. Devotees also participated in Langar (community feasting) on the ocassion.

27 Feb 2016 - 6:02pm | SK Hasan
Welcome gate to the historic Nazira Sub divison as been constructed and inaugurated at a public meeting on Friday. The gate was constructed with MLA development fund of Nazira ...

9 Apr 2013 - 5:38pm | Dibya J Borthakur
The Raha unit of All Assam Students' Union (AASU) on Tuesday took out a protest rally demanding immediate steps by the Government to protect the indigeneous textile industry of the state. The rally... 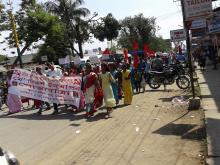 2 May 2015 - 8:30am | SK Hasan
The Communist Party of India (CPI) and its Labor Union observed the International Labor Day in a day long programme held at the Nazira Natya Mandir on Friday, May 1. The event was marked by a...
Follow @Assam Times