The body of a 60 year old at a stone’s throw distance from Namrup police station struck no less shock in the entire area on Sunday. Identified as Badal Konwar the body was spotted at a drain at 11.00 in the morning. According to his son Ujjal, his father was unwell for the last couple of days. The body was sent for post mortem. The police have started investigation to ascertain the circumstance.

Moderate turn out in GHADC polls 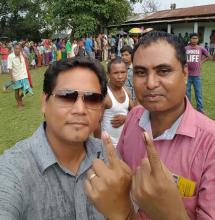 12 Oct 2015 - 7:47pm | AT News Shillong
Garo Hills Autonomous District Council polling is over with moderate turn out in Meghayala on Monday. Now the eyes are fixed on October 15 when the results would be available by the afternoon.The...

3 Nov 2008 - 7:06pm | swapan
Three youth have been killed by suspected KLNLF militants in the wee hours of the November 3 morning in Nagaon district. The deceased were namely Jogesh Shah, Mahesh Shah, Pawan Sarmah. The former...