KOKRAJHAR: Security forces are believed to have killed an NDFB-S rebel at an encounter in Kokrajhar on Monday.
Acting on a tip off army, police and para military forces conducted a combing operation in Jhorbari area where the rebel was killed in the wee hours. Details are awaited.

Atrocity on minority in Margherita?

21 Dec 2017 - 11:20am | Mithun Baruah
MARGHERITA: Tension refuses to die down in Margherita area in Tinsukia area on Thursday after a group of people allegedly forced a couple to strip off in full view of their children.The bizarre... 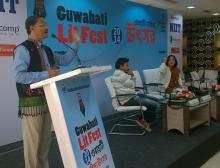 In quest of protest culture in music

29 Dec 2014 - 12:09pm | AT News
Singers, lyricists and critics agreed on Monday that the voice of simmering protest fails to proliferate in the Assamese music.Panelist in a discussion on “Turning into Literature: Music and...

20 Sep 2009 - 5:54am | editor
Assam Revenue Minister Bhumidhar Barman got candid with the media on saturday when he disclosed that Bangladesh has illegally occupied about 499.79 acres of land in the state. According to him, the...