The whole of the Golaghat Town wore a deserted look during the 11 hour bandh called by AASU. The bandh went peaceful. AASU workers blocked the roads by burning tyres.

25 Feb 2011 - 1:02pm | Smrity Rekha Kalita
Preliminary work on elephant census has begun on February 20 at Jeypore Resurve Forest, which area is surrounded by Namsung, Buridehing and Dilli River. These area are divided into nine... 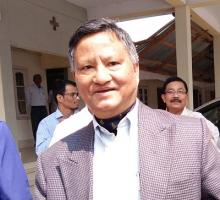 16 Mar 2017 - 4:35pm | AT Kokrajhar Bureau
The chairman of Committee for Land Rights of Indigenous People of Assam and former chief election commissioner(CEC) of India Hari Shankar Brahma to visited in Kokrajhar,heart of BTAD administration...

Tribute to the martyrs of the Sepoy Mutiny

19 Dec 2011 - 1:52am | editor
Patkai Trekkers, an NGO, with the help of the organizing committee, paid tribute to the martyrs of Sepoy Mutiny who fought bravely before fell to the bullets of the British troops at the historic...