The unique Bongeets, created by Bonkonwar Anandiram Das, are a beautiful blend of Bihu tunes with other native songs, and they resonated with the people of Assam, irrespective of age or musical preference. It was through these exquisite songs and lyrics that Bonkonwar interpreted his experiences, which also reflected much of the feelings of common people, while also depicting Nature in all its bounty. He breathed new life into Assamese music and the fresh appeal of the songs made them hugely popular among the masses. Bonkonwar employed the pastoral convention to talk about the hopes and aspirations of the rural folk, and through it, connected to larger humanity as well, in the hallowed tradition of pastoral poetry in the West. He has penned well over a thousand Bongeets, which has not only enriched our music, but has also reflected the uniqueness of Assamese culture. The world is, indeed, a better place when the richness of indigenous music is preserved and promoted. 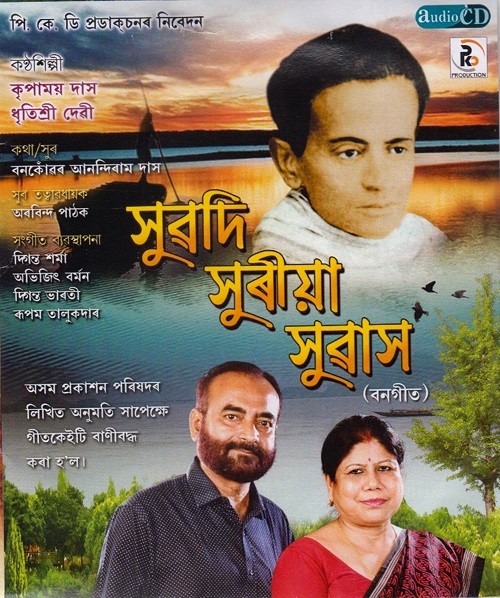 Recently, a new Bongeet album ‘Xuwadi Xuriya Xubakh’ was released by eminent musician Anupam Chowdhury on the occasion of Bonkonwar’s 50th death anniversary at the Guwahati Press Club amidst an august gathering. The eight songs in the album, beautifully rendered by the artiste-couple Kripamoy Das and Dhritishree Devi, is a musical feast for listeners, includes songs such as O’ Bulu Xeujiya, Axomor Xuwani, Baa O’ Boliya, Luitor Xuwani O’, O’ Rupahi, among others, which are likely to touch the hearts of many listeners.

Produced under the banner of P K D Production, the songs have been composed by noted musicians Diganta Sarma, Abhijit Barman, Diganta Bharati and Rupam Talukdar. The release function began with the lighting of the traditional lamp by Arabinda Pathak before the portrait of Bonkonwar. He is actively involved in teaching and preserving these traditional songs with their simple lyrics.

Pathak, during his inaugural speech, said that as long as the songs of Bonkonwar continue to appeal to the listeners, Bonkonwar’s memory will remain alive in the hearts and minds of people. He strongly believes that Bonkonwar's extraordinary artistic legacy needs to be preserved and promoted. Pathak also showered praises on Kripamoy Das and Dhritishree Devi, who have made quite an effort to grasp the finer nuances and details under his tutelage. The Bongeet album also owes its making to Munindra Kumar Saikia, who is personally and passionately involved in preserving and promoting the tradition of Bongeets. Its important that as artistes, one remains true to the purity of Bongeets, without deviating from its essence.

16 Jul 2007 - 4:02am | editor
Guwahati : There was another high profile kidnapping in Assam. Cement Corporation of India (CCI) official Kailash Nath Jha and his security officer, Madan Kumar Bora were abducted at gun point by...

31 Oct 2019 - 9:28am | AT Kokrajhar Bureau
KOKRAJHAR: A floral tribute and candle lighting rally  was organised on Wednesday evening in Kokrajhar town on the day of serial blasts on October 30 which claimed many lives and injuried many...

23 years of Assam Accord: AASU staging demo in the city

14 Aug 2008 - 6:11pm | editor
The All Assam Students Union activists are sitting in strike in the city from Thursday morning in protest the government failure to implement the Assam Accord which was signed by AASU and the then...
Follow @Assam Times