What is the CAB?

The Citizenship (Amendment) Bill, 2019, in short, is referred to as “CAB”. The bill which was passed by both the houses of the Parliament (Lok Sabha & Rajya Sabha) have been granted assent by the President and has now become an Act. It will come into force on such date as the Central Government notifies in the Official Gazette.

Who are the persons covered by CAB?

CAB grants citizenship to any person belonging to Hindu, Sikh, Buddhists, Jains, Parsis or Christians community from Afghanistan, Bangladesh or Pakistan, who entered into India on or before 31st day of December 2014 and they will not be treated as an illegal migrant. The bill also reduces the duration of residency from the existing eleven years to just five years for people belonging to the same six religions and three countries. It also necessarily implies that Muslim illegal migrants (Bangladeshis) won’t be entitled to citizenship.

What is the process for grant of citizenship under CAB?

If any illegal migrant of these communities makes an application in this behalf, the Central Government will grant a certificate of registration/naturalization, etc. Provided further that any such person shall not be disqualified for making an application for citizenship on the ground that a proceeding is pending against him and any proceeding pending against a person in respect of illegal migration or citizenship shall be abated on conferment of Citizenship to him. The objection by some of the States like Punjab will not affect it's implementation as it is a Central Act which is applicable throughout the territories of India.

Which are the areas excluded from CAB?

The CAB shall not apply to the tribal area of Assam, Meghalaya, Mizoram or Tripura as included in the Sixth Schedule to the Constitution and the area covered under “The Inner Line” notified under the Bengal Eastern Frontier Regulation, 1873.

What is the sixth schedule?

The sixth schedule of the Constitution deals with the administration of the tribal areas in the four northeastern states of Assam, Meghalaya, Tripura and Mizoram as per Article 244 of the Constitution. The notified sixth schedule areas of Assam are the Bodoland Territorial Council, Karbi Anglong Autonomous Council and Dima Hasao Autonomous District Council. The Sixth Schedule shields only seven of 33 districts of Assam. These 26 districts have a major chunk of illegal immigrants - both Hindus and Muslims - primarily with their roots in today's Bangladesh.

What is the Inner Line Permit (ILP)?

Outsiders, including people from other States of the country, require Inner Line Permit (ILP) to visit the North Eastern States of Arunachal Pradesh, Nagaland, Mizoram and Manipur. The main objective of the ILP system is to prevent settlement of other Indian nationals in the four States in order to protect the indigenous population. ILP may isolate the States and may hinder in the economic development of the State.

What is the justification of the Government?

All six communities have faced religious persecution in the three countries. Many such persons have fled to India to seek shelter and continued to stay in India even if their travel documents have expired or they have incomplete or no documents. The Act is aimed at giving a dignified life to these people, besides protecting their business and trade interest. These minorities in the Islamic theocratic States had been reduced considerably over the years, as they were either killed or forced to change their religion and thus were forced to flee to India. Further, the partition of India on religious lines and subsequent failure of the Nehru-Liaqat pact of 1950 in protecting the rights and dignity of the minorities in Pakistan and Bangladesh are the reasons for bringing this amendment Act.

Why Muslims have not been included?

Muslims in those three countries are not persecuted on the basis of religion as those are Islamic theocratic countries, where Muslims are not minorities. But case to case basis, for grant of citizenship, the Govt. has to consider individual cases as and when the times come. The Tamils, Rohingyas, etc. are excluded based upon the same logic.

What is the Opposition's argument?

The CAB ring-fences Muslim identity by declaring India a welcome refuge to all other religious communities except Muslims. It seeks to legally establish Muslims as second-class citizens of India by providing preferential treatment to other groups. This violates the Constitution’s Article 14, the fundamental right to equality to all persons. This basic structure of the Constitution cannot be reshaped by any Parliament. And yet, the government maintains that it does not discriminate or violate the right to equality. To contra this the Govt. has gone on record that the Muslim minority of India has nothing to fear from the amendment and their rights are fully protected.

Why is Assam angry about it?

Among the States in the Northeast, the outrage against CAB has been the most intense in Assam. While a chunk of these States has been exempted from the legislation, CAB covers a large part of Assam. The protests stem from the fear that illegal Bengali Hindu migrants from Bangladesh if regularised under CAB, will threaten the cultural and linguistic identity of the State.

The protest is mainly centred around CAB while it sets December 31, 2014, as the cut-off date for recognising the illegal immigrants as eligible refugees to acquire Indian citizenship, which is in violation of the Assam Accord of 1985.

Under the Assam Accord, the cut-off date was set on March 25, 1971. The Assam Accord's cut-off date was also the basis of the National Register of Citizens (NRC) that was finalised earlier this year under the supervision of the Supreme Court. The NRC left out about 19 lakh people who could not prove their citizenship claim. Majority of them are said to be Hindus.

What is the assurance of the Government to the people of Assam?

Prime Minister Narendra Modi tweets - “I want to assure my brothers and sisters of Assam that they have nothing to worry after the passing of CAB. I want to assure them- no one can take away your rights, unique identity and beautiful culture. It will continue to flourish and grow.”
Allaying the apprehensions of the people of North-Eastern regions, Home Minister said that the linguistic, cultural and social identity of the people of the region will be preserved and this Bill contains the solution to the problems of the people of these States, as amendments have been incorporated after marathon deliberations with various stakeholders from North East for last one month. He also assured the people of Sikkim that the Bill would not affect their rights in any way. The issue should be seen as a humanitarian one, beyond political ideologies, he added.
Assuring the people of Assam that their linguistic, cultural and social identity will be preserved, the Home Minister lamented that a Committee under Clause 6 of the Assam Accord (1985) was not constituted for over three decades till Narendra Modi Government came at the centre. Reiterating the Government’s commitment to protect and preserve the rights of the indigenous people, Shri Shah urged the Committee to submit its report at the earliest to the Central Government for effective steps to be taken to fulfil provisions of the Accord.

The Home Minister said that this Bill contains provisions to grant Citizenship on reasonable grounds to refugees facing religious persecution in the above three countries, which in no way go against any provision under the Constitution of India and does not violate Article 14. He also reassured that no provision of Article 371 would be violated by this Bill.

What are the legal options available to the people of Assam against CAB?

CAB can be challenged in the Supreme Court of India by contending that it violates Article 14 of the Constitution of India and strikes at the basic feature of secularism of the Preamble of the Constitution. The amendment is manifestly arbitrary, irrational and without adequate determining principle and is discriminatory. There is no reasonable basis for the differentiation created by the State while granting citizenship to select class of immigrants. The classification created has no nexus with the objective sought to be achieved.

In contra, the government may argue that the parliament is the supreme law-making authority of the country and the presumption of its legality is in its favour. The classification is not arbitrary and it is reasonable and rational based on intelligible differentia, etc.

It is difficult to pre-suppose all the arguments which will be made before the court.

In the meantime, petitions challenging CAB has already been filed by various opposition political parties in the Supreme Court. However, the prayer for urgent hearing in regard to the constitutionally has been rejected by the bench headed by the chief justice Sharad Arvind Bobde.

The solution to the problem::

The names of all foreigners are required to be deleted from the voter list who have come to Assam after 24th March 1971. Persons who are declared as foreigners have to be expelled from the country.

Constitutional, legislative and administrative, as may be appropriate, shall be provided to protect, preserve and promote the cultural, social, linguistic identity and heritage of the Assamese people in terms of Clause 6 of the Assam Accord.

It will be ensured that relevant laws for prevention of encroachment of Government lands and lands in tribal belts and blocks are strictly enforced and unauthorized encroachers evicted as laid down under such laws. Assam is yet to have a land policy.

It should be ensured that the relevant law restricting the acquisition of immovable property by foreigners in Assam is strictly enforced.

Transfer of agricultural land to outsiders be restricted except land in urban areas. But this has a negative effect because the farmers may not get appropriate value for it.

More than 50% seats in the Parliament and the State Legislative Assembly be reserved for the indigenous people so that they have the final word in all the decision making the process.

Instead of quelling the protest by force the Govt. should initiate a dialogue to remove any misgivings in the greater interest of Assam.

(The writer Mr Bhaskar Dev Konwar is a Senior Advocate who is an indigenous son of the soil of Assam).

20 Jul 2017 - 11:35am | AT Staff Reporter
The ongoing tussle between ABSU and ruling BPF party has taken turn in Bhergaon sub-division in Udalguri district,both sides alleging each other in the multi crore PDS scam.The allegations of ABSU... 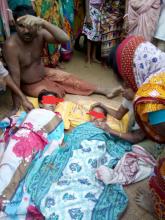 13 Jun 2018 - 9:08pm | Nikhil Mundra
Hojai:-Sensation Prevailed in Hojai District's Hayang Gaon on Wednesday when a  shocking  incident of death came to light.  As Per Information, Two minor girls died in a flash flood...

28 May 2014 - 10:24pm | AT News
Two NDFB(S) militants were lynched by villagers in Sonitpur district on Wednesday.The incident took place at Ghiladhari in the evening where the three Bodo militants arrived in the village to extort...
Follow @Assam Times