New Delhi: The Delhi police have arrested a 40-year-old man a week after he spat on a girl from Manipur and called her Corona triggering no less acrimony among the north eastern people.

According to information, he was picked up by a team led by Deputy Commissioner of Police in charge of West Delhi from Mukherjee Nagar area on Wednesday.

He is the man who spat on a 23 years old Manipuri girl after calling her Chinese corona virus. He was arrested by Delhi Police today. Thank You @DelhiPolice, @ArvindKejriwal ji, @AmitShah ji, @KirenRijiju ji. #StopRacism pic.twitter.com/ZcA12BqHjy

Initially,  the individual called her Corona as he was riding a bike and as he girl objected to it in public he spat on her and vanished, said police.

Many organizations from the North East demanded arrest of the accused and exemplary punishment calling it a racist attack on the north eastern people.

Even Union minister Kiren Rijiju also expressed grave concern over the rerun of racist attack. But what exemplary punishment awaits him remains to be seen.

I'm sad to see such racial discrimination in many parts of India. Anyone whoever discriminates people of other community, region, religion or race are the real enemy virus. All State Govt must take strict action as per the direction of the Govt of India. https://t.co/GZAwV6Q68P pic.twitter.com/v8iU4xXDuA

27 Oct 2015 - 7:52am | Abhinav Verma
The Arunachal Pradesh government has released an amount of Rs 44 crore to the Panchayati Raj institutions for developmental projects at the grass root as per their respective developmental... 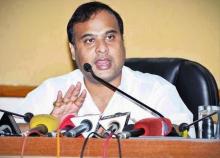 End of road for Himanta in ACA!

18 Jul 2016 - 5:39pm | AT News
The Supreme Court’s ruling on the Lodha Committee report suggests the end of the road for Himanta Biswa Sarma in Assam Cricket Association a couple of weeks after he took its reins. Sarma assumed...

3 Nov 2012 - 4:36am | editor
Tension is simmering along the Assam-Bangladesh border in Cachar district following reports of entering extremists from entering the district for creating law and order problem. The district...