30th January is a special day for the nation for peace and harmony as being the day of Father of nation’s death anniversary. Born in 1917, veteran freedom fighter shri Paniram Das of Kalaigaon, (Udalguri dist) in Assam keep his Gandhian charkha (Jotor in Assamese) on this particular day. He remembers his younger day of quit India movement under Gandhiji.

Since the time of Lt Gen SK Sinha as Governor of Assam, Shri Pani Ram Das remains more attractive personality to the people of Assam. All because he helped Army authorities to make the great Patharughat Ronn (war) memorial live with public. Every 30th January morning he will be escorted to that holy place to pay homage to those farmers brutally killed by the British.

This time Paniram Das did something more unique. Instead of thinking for his 06 children and 10 grand child, he decided to donate 2 bigha (6 acres) of land worth Rs.10 lakh to Indian Army for setting up a VTC (Vocational Training Centre) at Kalaigaon of present Udalguri district of Assam in this 30th January 2009. This will have facility for local youths and women for skilled training of Candle making,DTP,Weilding,Capentry,Plumbing etc.

A large number amounting to thousands of local people attended the function. Since this is the first of kind after long Army operations in the region, people could see light of the day. Local school children presented a colourful cultural ceremony while the function concluded by the day end.

Indian Army authorities formed a local management committee under the SDC as Chairman to take care of the VTC.

However it is also interesting that same Army badly tortured shri Pani Ram and family on midnight during onset of Operation Bajrang in Assam quoting ULFA HQ on 08 Jan 1991.Army never seek apology for the biggest blunder, but it was then honourable Governor Gen SK Sinha to take promt action to seek official apology.

11 Jun 2010 - 3:52am | DigantaTalukdar
The result of the Tiwa Autonomous Council election held in 11 constituencies in Nagaon district on June 7 was declared today. Though the counting held under tight security, a minor dispute arose... 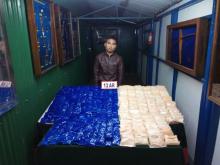 14 Mar 2018 - 7:02pm | AT News Imphal
IMPHAL, Mar 14 : In one of the biggest recoveries of contraband items in recent times, troops of 12 Assam Rifles of 26 Sector Assam Rifles apprehended a drug peddler with brown sugar and WY tablets...

Declaration of tea as the national drink can in no way be termed as at the cost of coffee: NETA

18 May 2012 - 12:35pm | Ritupallab Saikia
Reacting over the Minister of State for Commerce and Industry, Jyotiraditya M. Scindia’s statement on Rajya Sabha yesterday regarding the issue of declaring Tea as National Drink of India,...