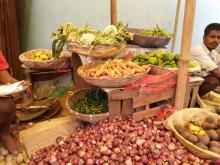 26 Jul 2017 - 11:52pm | AT Kokrajhar Bureau
There  has been steep rise in the prices of essential commodities in the post flood scene much to the utter disappointment of the common people who blame it on the middlemen. The soaring of...

7 Feb 2016 - 10:19pm | AT News
The much colorful Queer Pride Guwahati was held on Sunday with people participating the walk from all walks of the society. A street fashion show by Enlighten was also held to support the...

Dhola firing toll goes up to 2

11 Jan 2018 - 8:23am | AT News
MONGOLDOI: Yet another person succumbed to injuries in the police firing in Dhola on Wednesday triggering huge protest the sub urban area in Darranga district. The seriously injured person who was...