Prove charges or face the music: AGP to Himanta

Addressing a press conference in Guwahati on Tuesday, AGP spokesman Atul Bora said what Dr Sarma has said is totally baseless. Bora further said the party would take Dr Sarma to the court if he fails to prove his charges of cash transaction.

According to Bora, Dr Sarma was trying his best to create a string of pree poll violence so that the party could extract political mileage from the troubled waters. The AGP leader countered the charges of AGP's negligence for the minorities and women in the list of candidates saying the regional party does not have any politics based on castes, creeds and religion.

Notably, Dr Sarma was trying to make a kind of flutter on Monday saying that a huge amount of cash deal only ensured pre poll alliance between AGP and BJP and that he has evidence in video footage to prove his charges. 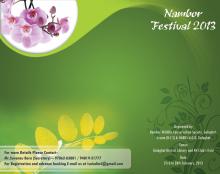 10 Dec 2012 - 9:29pm | Suvansu Bora
The Nambor Wildlife Conservation Society of Golaghat is going to organize Nambor Festival on March 1 to 10, 2013, the main aim to organize this festival to promote tourism, eco-tourism and...

25 Feb 2014 - 10:06am | AT News
Bandhs and road blockades seem to have greeted Rahul Gandhi on his two days visit to Assam from Tuesday.Several organizations have enforced bandhs across the state raising their long standing demands...