After moments of hectic lobbying in Delhi former minister for chemical and fertilizer and Jorhat MP Bijoy Krishna Handique was inducted in the new Manmohan Singh cabinet on Friday. .According to information, Handique the fourth time MP from upper Assam's Jorhat Lok Sabha seat would take oath of office and secrecy from President Patil at a function at the Ashoka Hall. Handique will be among the 20 other minister including the Prime Minister Dr Manmohan Singh.

Permalink Submitted by Ronnie on Fri, 22/05/2009 - 13:21
Kudos to Honourable Minister Bijoy Krishna Handique for being offered a cabinet berth in UPA government. Assam is a neglected State in every sense. There should have been more ministers in the cabinet from Assam.This is injustice to the people of Assam. The political leaders of Assam should have opposed such a cheap offer. They should have reacted like DMK supremo Karunanidhi.

Permalink Submitted by Ronnie on Fri, 22/05/2009 - 14:57
Hearty Congratulations to MP Bijoy Krishna Handique. We are proud of you. 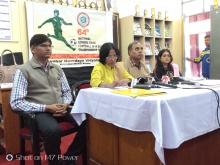 3 May 2014 - 8:51pm | AT News
At least 22 people have gone traceless after miscreants set on fire over 50 houses on Friday night.Twenty four hours have passed since the miscreants launched an attack on Khagrabari village in...

All out against Modi govt

10 Jan 2015 - 6:30pm | AT Political Bureau
A huge Congress rally in Guwahati on Saturday vowed to go all out against NDA government at the Centre citing many U turns on a number of vital issues confronting the state.In his address, chief...
Follow @Assam Times