t is well-known to all that Bihu is the national festival of Assam. There is a saying that the word “Bihu” comes from the word of Tai language “ Boi- Hu”. “ Boi” means worship and “ Hu” means cow. And the full meaning of it is to worship the cow. And in the course of time the word “ Boi-hu” becomes as Bihu. Among the three bihus Rongali or Bohag Bihu is the festival of welcome of the Assamese new year. Bihu is the backbone of Assamese culture. It is the festival of happiness, love and affection for the Assamese people, specially for the younger generation. Rongali or Bohag bihu is celebrated for seven days. During these days the heart of the young girls and boys cheers up and blooms with tremendous joy and gaiety. They are awaiting for this bihu eagerly in order to get together and the weavers are also remained busy in weaving “ Bihuwan” which is the sign of hounour and love and affection for the Assamese people. The price value of these “ Bihuwan” or “ Gamocha” may be the cheapest one, but it is the symbol of honor and respect for every Assamese. Hence, the Assamese people feel pride by offering a Gamocha to the guest who comes to visit Assam and the honor of this Gamocha is far more valuable than anything else. All over Assam Bohag bihu is celebrated with pomp and gaiety. But Barpeta is exceptional one. Here Bohag Bihu is celebrated with Satriya tradition and Barpeta satra is the main place of this tradition. The age old tradition remained here hundreds of years. We the people of Barpeta cannot think of any festival without Barpeta satra.

Barpeta is called the Venice of east. At Barpeta Bohag bihu is called in our colloquial language “ Bohagar Domhi”. 15th century of Assam had witnessed the emrgence of a spiritual leader whose name was Srimanta sankardeva , a prophet, philosopher, social reformer, artist, musician, dramatist, poet, painter and linguist all combined in one, srimanta sankardeva like the effulgent sun radiated his luster to shine all over Assam and to transcend far beyond, he was acknoldged as the first representative and architect of the Assamese sub- nationality. Srimanta sankardeva and his great disciple sri sri Madhabdeva, laid the foundation of an organized and distinct form of Assamese culture and literature. These two gurus made the grannery of assamese culture full . And the great disciple of Srimanta Sankardeva, Mahapurush Sri Sri Madhabdeva established Barpeta Satra in 1573 AD in order to preach the Neo- Vaishnavite culture and “Ek- Saran- Bhagawati Naam Dharma”. Barpeta satra is enlightened by the light neo- Vaishnavite culture of Mahapurush Srimanta Sankardeva and Sri Sri Madhabdeva.For the people of Barpeta, the ‘Kirtan Ghar’ or Barpeta satra is the main source of Bohag Bihu. The inhabitant of Barpeta united into the one thread of unity which bounded the people of Barpeta together. There is one culture as we can see in the midst of Barpetians. And that is satriya culture. Barpeta is a place of homogeneous culture, whereas Assam is a place of Heterogeneous culture. And all the people come to Barpeta Satra with a religious attitude. We canot see the youths of Barpeta here performing Bihu dance in the open field of the locality like other parts of the state. . But some organizations arranged bihu in the stage. And then the youths took part in bihu dance. Moreover it is also mentionable that they youths of Barpeta come to Barpeta Satra or kirtan ghar with a religious view, there is no chance of sexual urges here.

Bohag Bihu or “Bohagar Domhi is celebrated at Barpeta satra for seven days like other parts of the state. The first day is called here “Garu Domahi” or “ Garu Domhi”. It is observed like the other parts of the state. The next day is called” Bor Domhi”, as it is the first day of Bohag. In this day people strike on the foot of other people with the tree of “Hatisuriya”( elephant tree). And there is also a saying that by striking with the “Hatisuriya” the people also gets strength and can be able to work like the elephant. On this special day people at Barpeta also along with the other parts of the state, take bath with “Mah and Haladhi” and the Youngers take blessings from the elder by giving “Bihuwan”. After than the people of Barpeta proceeded towards Barpeta satra or Kirtan Ghar and knell down in front of “ Guru Aashan” for the peace or wellbeing of the society. It is already mentioned that all the festivals of Barpeta are satra based and without satra or Kirtan ghar it is incomplete. In this first day of Bohagar Domhi after the regular prasanga, one astrologer come and explain in detail how the ensuing new year will be passed in the state or country and also said about the good and bad sides of every Zodaic signs of every human being. During this time of Bihu along with “chaidhya prasangas” “ Gayan- Bayan, Gosha Kirtan, and ojapali “ are also performed at Barpeta satra. And during these seven days the “ Bansaras or Haties” performed Ankiya Bhaonas at “Tupar Chotal” in front of the main prayer hall( Kirtan ghar). Mentinable that the birth and death anniversary of the followers of Mahapurush Srimanta sankardeva and sri Sri Madhabdeva couldn’t be found properly. That is why the “ Tithis”( Birth and Death anniversary) of those followers are observed during these seven days of Bohag bihu and five days of Magh bihu and at Barpeta satra it have been perhaps observed during the time of Mathura Das Bura Aata, the first satradhikar of Barpeta satra. There is also a tradition among the women of Barpeta that in the evening of “ Bor Domhi” they used to collect vegetables( spercially pot-herbs) which is in our colloquial language called “ “Sathek Tola” .

Bohag bihu her at Barpeta ended in the seventh day. That day is called “ Naam Domahi”, because there is a great performance of “Thiya naam :” by the devotees of Barpeta which is rare to be found in any parts of the world. “ Thiya Naam” is held with the union of 22 haties, ( mainly means thul three haties- Dakshin Hati covers -6 haties, Nahati covers- 5 haties and Uttar hati covers – 11 haties). On that day thousands of devotees assembled together with a mind of unity and join in this famous “ Thiya naam” at Barpeta satra. This thiya naam is at first started in front of “ Dalan”( main entrance door of the satra). The devotees performed “ thiya naam” with geart cymbols and enjoy it fully. The heart of Barpetians enthralls with great devotion to lord Krishna as the compositions of the Thiya naam is the praise of lord Krishna. The devotees bring raw sugar on this holy day with aniseed and placed it at the “sarai” and take blessing in front of the kirtan ghar for peace and tranquility. Thiya Naam is also called “ Bir Naam”. There is a saying that this thiya naam is so called bIr naam because in the royal palace of king Bolli, the daityas sang song jumping and dancing. Hence as this thiya naam is performed standing and jumping mode like the daityas , this is also called “ Bir Naam”. The devotees here at Barpeta satra started the Naam in front of the entrance door under the shade of “ Chandra Taap” and later on enters into the satra campus singing Naam and at last knelt down at Mathar Chotal asking excuses to the lord Krishna and Guru dujana ( Mahapurush Srimanta Sankardev and Sri sri Madhabdeva) for any omission and commission in performing the “Thiya Naam”.There is a common believe among the people of Barpeta that by performing this “ Thiya Naam’ they can be assured themselves that no evil power can be able to touch Barpeta, the second heaven of the world and this believe still made the satra a unique one. 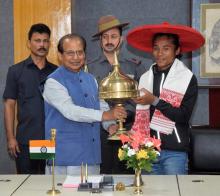 2 Jul 2018 - 7:36pm | AT News
In recognition to the extraordinary talent and her meteoric rise in the sprint circuit, Assam Governor Prof. Jagdish Mukhi felicitated Hima Das at a function held at Raj Bhavan today. Fresh from her...

Why so much mud-slinging during the polls?

16 Apr 2009 - 9:20am | Daya Nath Singh
It has been noticed during each and every election that the political party leaders utter too much against their rivals, but keep silence on their own performance. All the political parties have some... 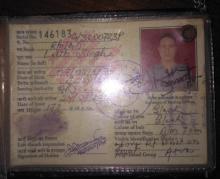 APBN personnel beaten up in Roha

25 Feb 2017 - 1:44pm | Dibya J Borthakur
The locals of Bagariguri area near Roha severely beat an Assam Rifles personnel posted in Kohima suspecting him to be a dacoit. The man allegedly tried to enter a house in the locality on Friday...