On the May 29, the cultural programme was organized which was inaugurated by the deputy commissioner of Nagaon Manish Thakur. After the inauguration, the artistes of Jagoroad performed a colorful Tiwa dance followed by a series of 6 classical dances performed by Trishnakhi Sarma and her group. Noted Indian playback singer Alka Yagnik who was invited for the cultural show thrilled the audience of Nagaon with her numbers. The 44-year-old velvet-voiced singer also cracked few jokes also. The audience also came alive when Kaushik Roy Choudhury and Reena of Indian Idol show rendered their numbers. Alka was feliciated with traditional Asomiya Japi and Phulam Gamusa by the organsing comittee. 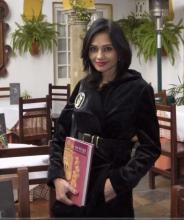 4 May 2016 - 7:22am | Mowsam Hazarika
Kristna Saikia, a well known actress has been honoured with 'Maharashtra Gaurav Samman'- (Pride of Maharashtra ) award on 1st May 2016 on Maharashtra Day by EIN news Channel 'Indian express News' as...

4 Feb 2012 - 10:49pm | editor
Altogether eight people were killed and several others have been injured at a tragic a road mishap in Nagaon district on Saturday. The mishap took place when a Tata magic carrying a group of...

7 Oct 2018 - 11:11am | Nikhil Mundra
Hojai:- In a bid to create awareness among the customer's  regarding Non Performing Assets (NPA's) United Bank Of India,Daboka branch organised a rally on Saturday at Daboka Town under...