During celebration of India's 60th independence, Nehru Centre (the Cultural Wing of the High Commission of India) is going to screen Jahnu Barua's Kushal Konwar - The great martyr of Assam on 27 August, 2010. Quit India Movement in Assam is a saga of patriotism of such martyrs as Kushal Konwar, whose birth centenary falls this year.

On 13 August, 2010 - Basundhara : The earth written and directed by Hiren Bora will be screened. The film is about conflict between man-elephant in the forested area of Sundarpur, revealing the ecological disaster wrought by the loss of habitat for the elephants due to illegal trafficking of wood, an unlicensed stone quarry and uncontrolled poaching.

“Basundhara-The Earth” has won much critical acclaim. The film has had an impressive showing at the Kolkata Film Festival and the “Third Eye Asian Film Festival” in Mumbai. It was the first Assamese film to be released in 2010. It also won nine state awards.

30 Apr 2012 - 12:44am | Ritupallab Saikia
The 150 hours of free Entrepreneurship Skill Development Programme on Digital Photography and Photoshop organised by the Indian Institute of Entrepreneurship (IIE) in association with UB Photos...

23 May 2017 - 9:21am | AT Kokrajhar Bureau
Additional DGP (SB) Pallav Bhattacharya says that security has been intensified across the state to meet healthy function of  three years anniversary of NDA government at centre and one-year at... 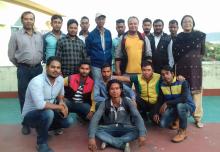