Anti social activities are continuing by outlaw militants in Karbi Anglong. After the two traders killings at Samelangso recently, a minor school student has been kidnapped again by suspected Karbi Anglong armed militant organization from Kauri pahar under Dokmoka police station on Wednesday morning at around 7.40 am.

According to the report, Jirsong Engti (12) son of Rajen Engti who is studyingin class five at Nirmal Niketan, situated at Kauri pahar was going to school along with his cousin by their Santro car on Wednesday morning. Suddenly a group of armed militants that were ready from earlier come out from a Scorpio and blocked the car that Jirsong Engti was traveling in. Quickly putting the gun point on the head of the driver they (the armed groups) kidnapped Jirson Engti from NH-36 near Kauri pahar and fled away from the spot. Till the date of filing of the report, no militant organization has claimed its involvement in the incident. Meanwhile security forces are conducting a massive search operation in the Dokmoka and adjoining areas. Well-wishers of the victim family appealed to the kidnappers to release Jirsong Engti unconditionally for the greater interest of humanity.

It may be mentioned here that the continuing incidents of kidnapping and killings activities by the various militant organizations in the hill district are wreaking havoc among the common people. And the general observation has been that, police administration is not seen in the right position to tackle the ongoing anti social activities in the district. 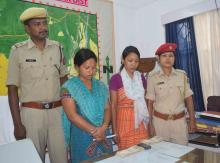 13 Jun 2016 - 4:13pm | AT Kokrajhar Bureau
Security forces has been intensified its operation against militant outfits in the region and subsequently able to arrest two women cadres of NDFB(S) cadres in Kokrajhar district on Monday. Speaking...

17 Aug 2015 - 7:49am | AT News
Chandan Nagar police have arrested three people including a woman charging the trio with trafficking a girl from Sivasagar.Acting on a complaint lodged after the victim was rushed to a local hospital...

23 Aug 2008 - 12:17pm | Nagendra Sarma
Two officials of the Home Ministry from Delhi are reported to have visited Guwahat on the sly and met the PCG members in a bid to resume peace talk which was stunned without any result and since then...