The Mandó, the classic elegance of Goan folk music, has been at the forefront when giving Goan culture its distinctive edge. The mandó is a three-branched art form, probably the only one of its kind. The three dimensions that are an integral part of the mandó and that complete it in all respects are: the music, the lyrics and the dance. The mandó characteristically is about romance and love or the tryst of fate and the unhappy moments of failed love. The dulpod that always follows the mandó on a faster beat is all about the social living in Goan society. The dulpod has sarcasm and/or humour in its lyrics and has lately taken to making sardonic and pungent comments on Goa and its degradation socially, morally, politically and environmentally.

It has been very encouraging to see that there are many individuals and organizations that have been inspired to keep alive the spirit of the mandó. Though the villages of Curtorim, Raia and Loutolim in the South of Goa are said to have seen the beginnings of this astounding form of folk music, other areas of Goa along with these have been responsible, in contemporary times, for keeping it alive. Pervis Gomes has spent a good decade and a half doing his bit to give the mandó its due place in the Goan cultural line-up. He has the practical goal of making sure the rich cultural heritage of Goa is not only kept alive within Goan shores but also ferried around the globe.

It was in 1997 that Pervis hit upon the idea of bringing together some Mandó mogis (lovers) and forming a group to promote and expose this art form even more. To support him he had his wife, Melita and three great musicians: Martinho Dourado and Sebastião Viega, both deceased, and Balbino Fernandes.

The late Martinho Dourado was very supportive of the group and went out of his way to arrange the music for the group even at the ripe old age of 89! He continuously put in great efforts to elevate the group and Goan culture for around six years. Another great musician Fr Peter Cardozo sfx has also helped the group with their music many a time.

The largely captivating facet of the group is the number of youngsters that form a very vital part of it. There is young blood in the music as well as amongst the presenters. Cultivating love for the mandó amongst youngsters is something the group encourages and has continuously worked towards.

"In spite of our busy schedules we manage to keep Goan culture aloft," affirms Pervis. The group works against all odds to satisfy their hunger for showcasing Goan culture. They have performed at many places in Goa and have won laurels at various Mandó Festivals all over Goa. Their performances have always been on the up and they have made a mark with their original compositions.

Pervis and his leadership also have a major role to play. "It is because of his dynamism that we are always rearing to go," says an enthusiastic member of the group, Ralph Vas. "All the pains that he puts in really benefits the group," continues Ralph and he also praises the effort of Melita, Pervis' wife, who takes charge of the co-ordination to ensure the smooth functioning of the group.

Pervis has continuously used current and relevant social issues in the dulpod that he composes. This creates awareness about day to day issues that touch Goa. The group then performs these in their performances and this is their way of keeping Goan culture alive.

Pervis has led his group Mandó Mogi to many a great height. They were adjudged 'Best Group' at the 40th Mandó Festival organized by the Goa Cultural and Social Centre, Panjim, Goa. This festival can be equated to the Grammy Awards for the mandó. They were also awarded the prize for the best original mandó. Lyrics written by Pervis were put to music by Pervis himself and the music was arranged by the young enthusiastic damsel Jane Mendes. Jane has shown her proficiency arranging with a maturity far beyond her years. The group has also won prizes at the other Mandó Festivals organized at Margao and elsewhere too.

The group also includes many young achievers: Jane had completed her eighth grade in violin and is presently pursuing her diploma course. She plays the violin, mandolin and also sings. She has participated in many choir groups and bands. Jane has been arranging music for Mandó Mogi for the last three years.

The other musicians are Collin Pereira and Assenca Fernandes. Pervis will strike a concordant tone on the ghummot (The percussion instrument the mandó cannot be witout). Other members of the group are Pervis Izlante and Ralph Vas, Samson Fernandes, Reagan Pinto, Namita D’Silva and Nicia Pereira.

Their grit and determination has helped the group meet their dreams of taking Goan culture to international venues. Opportunity has struck them many a time as they have been invited to perform in Dubai and Sharjah and even Canada. Wherever they go, they always ensure that they give their audience a complete overview of Goan culture. The Dekhni, Fugddi, Vavraddi and the mandó in opera style and in the traditional and original categories form part of their presentations. They will now be at Assam to give their audience there a short but thorough glimpse of Goa.

Pervis is an enthusiastic man who always dreams big and aims higher. "This is just the spark," he says with satisfaction and determination while promising that "there will be a lot more to come from us. We are resolute in pledging that we will take Goan culture to the pinnacle in the future."

7 Sep 2008 - 9:49pm | editor
The flood situation in Assam is improving during the last 48 hours an aroused blame game is refusing to recede. Several political parties are demanding probe into the corruption that has crippled the... 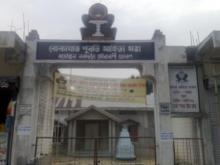 2 Mar 2008 - 7:21am | editor
The Golden Jubilee celebration of the Bokakhat Puwati Xahitya Xabha (BPXX) which is scheduled to be held from March 22 started its pandal construction work.Jiten Gogoi, MLA Bokakhat laid the...

16 Feb 2014 - 8:52am | AT News
Journalists' Forum Assam (JFA) has expressed serious concern at the ceasing of publications of newspapers in Arunachal Pradesh since today due to the ongoing conflict between the media persons and...