The Oxford Dictionary defines the word sacrifice as the voluntary relinquishing of something valued or surrender of possession as offering to deity.

Animal sacrifice (of goats and buffaloes) is otherwise rare but is held on certain festivals in contemporary India, and Sri Lanka, especially to honor the Mother Goddess (Durga) by the followers of certain cult groups of Hindus belonging to the sect of Shaktism. Due to severe condemnation by most other Hindus, calling this as a barbaric act, these animal sacrifices are quickly disappearing in India and Sri Lanka. Among the Hindus of Nepal, and certain sections of Bengal and Assam animal sacrifices are common even today, not only for the Mother Goddess, but also for almost all deities of the Hindu pantheon. The Hindu way of slaughtering the animal may be less painful than others, as it involves an immediate severing of the whole neck of the animal by one quick stroke of a sword or an axe (otherwise great calamities are believed to befall the sacrificer), rather than slitting of the throat.

In ancient times it was also common to offer the life of a human being to a god. The Aztecs sacrificed thousands of victims (often slaves and servants were killed or buried alive along with dead kings in order to provide service in the afterlife) A similar tradition also existed in China. The Celts and German people are among the European peoples who practiced human sacrifice in the past.

The human race is a shrewdest of all races on the earth. The ancient people steeped in pagan culture and primitive superstition believed that human sacrifice would placate the enraged god and expiate their sins, this practice was particularly common among the agricultural people who sought to guarantee the fertility of the soil or avert calamities in the form of flood or famine and therefore followed the ritual of human sacrifice. But gradually when the covers of primitivism were dispelled man thought it best to put an end to this savage ritual which was putting their own lives at peril. But they found an easier way out by replacing the human by innocent voiceless animals that cannot protest these barbaric acts and neither realise their end till the final blow.

The word sacrifice is to give up a possession dear to us in such a case how can an animal be representative of something dear. As the animal to be sacrificed is bought minutes before being sacrificed for a few hundreds of rupees. The devotee seeking divine blessing is in no way attached to the sacrificial animal therefore it cannot be termed as sacrifice rather it is plain slaughter or killing of an animal.

The strides of modernism has touched our entire lives than why is it that we are still steeped in religious superstition. Our culture had been plagued by other evils like Sati but we have moved away from that era. We have realised the futility of sati system. Just as we have graduated from earthen lamps to halogen lights powered by electricity similarly its time we shed our misunderstood religious trappings and take on its greater spiritual meaning of “to live and let live”.

Prayer should not lead to negativity of thoughts and actions when we create a hue and cry over killing of humans what right do we have to initiate the killing of an animal. Isn’t it time we graduated to the practice of a bloodless sacrifice in the form of flowers and fruits or exercise sacrifice in the true sense of the term by relinquishing an object of desire and not a living creature pulsating with life to fulfil a mere superstition.

Permalink Submitted by jaay on Tue, 11/12/2007 - 06:03
I was witness to such an incident when I was child, I saw the buffalo being chased and slaughtered in the garb of religious ritual. Anyways, the practice of Human sacrifice was common until BritisherÃ¢â‚¬â„¢s banned it in 19th Century and Maharishi Mahesh Yogi introduced Vedas and called the sacrifice to be symbolic. Not only in India, but it was prominent across the globe. Like the Mapuche, the Israelites once climbed mountains to talk with God. When the Jewish reformers of the 7th century BC campaigned to suppress human sacrifice, they began by killing the shaman-priests who performed these rites on their own altars. They destroyed hill-shrines identical to the high-mountain shrines still used by shamans in South America. The Mosaic Law received from a mountain now made bloody Moses a heretic. Animal sacrifice was confined to the temple, and human sacrifice forbidden. And not forget, after the Crucifixion of Jesus, it was widely seen as the SACRIFICE and Christians were offered salvation in the blood and body of a sacrifice. If the Crucifixion was the final human sacrifice, then the &quot;blame&quot; for the murder of Jesus was thrust upon the Jews. Many Christians were convinced that Jews were devils who secretly mocked Easter by sacrificing a kidnapped Christian child on a cross. Centuries of anti-Semitism led to the Third Reich, whose mission was to purify the world. Well, the list is endless, and what, all in the name of religion. Anyways I just wanted to make sure that readers did not get an idea that we were not the only ELITE people to indulge in this. Animal sacrifice was replaced with COCONUT, again as a symbol, but probably due to illiteracy and awareness this is still prevalent. But that leaves me with another question, what when this sacrificed is offered by educated, and respectable citizenÃ¢â‚¬â„¢s, which is not un-common? Nice article.

Permalink Submitted by navin jain on Mon, 18/10/2010 - 17:41
beautiful article and the wordings 'The devotee seeking divine blessing is in no way attached to the sacrificial animal therefore it cannot be termed as sacrifice rather it is plain slaughter or killing of an animal.'

Permalink Submitted by navin jain on Mon, 18/10/2010 - 17:44
beautiful article and the wordings 'The devotee seeking divine blessing is in no way attached to the sacrificial animal therefore it cannot be termed as sacrifice rather it is plain slaughter or killing of an animal.'

2 May 2010 - 5:34pm | Daya Nath Singh
Assam has suffered a lot due to ongoing movement on ‘sovereignty’ by United Liberation Front of Asom (ULFA), for last three decades. Thousands of innocent people including women,...

5 May 2015 - 5:52pm | AT News
The Union cabinet has approved the land swap deal with Bangladesh a day after the party MPs and state unit president agreed at a crucial meeting in New Delhi.The cabinet which earlier decided to... 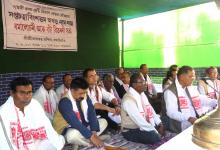