Dilemma over selection of the Chef de Mission of the Indian Contingent for the London Olympic for last few months ended on Monady as the selection committee of the Indian Olympic Association (IOA) has named Olympian Ajit Pal Singh for this post. The IOA constituted a seven member panel to decide on this subject unable to come to conclusion between vice-President IOA Tarlochan Singh and the President of Indian Weightlifting Federation Birendra Prasad Baishya. With an unexpected step IOA has decided to appoint the captain of the hockey team that won the World Cup in 1975, and keep both Tarlochan Singh and B P Baiahya as observer. There will be three observers for Indian delegation to London Olympic and remaining one post is yet to be announced.

16 Jul 2014 - 8:30am | AT News
Security forces in BTAD areas are on an intensified operation in search of Bitu Roy Brahma on Wednesday, 24 hours after the police constable went missing from Labdang guri in Baksa district. Brahma...

31 Aug 2017 - 11:34pm | AT Kokrajhar Bureau
The All BTC Minority Students Union (ABMSU) has  expressed serious concern over the failure to arrest main culprits behind the assassination of Lafikul Islam in Kokrajhar on August 1....

Cartoons for Climate- Exhibition and Talk 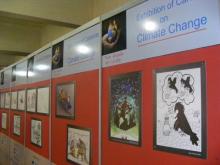 27 Feb 2010 - 11:16pm | editor
Cartoons are one of the most efficient methods to spread even serious messages with a humorous touch. Climate change is considered as a very serious topic and most people tend to consider that it...
Follow @Assam Times