Former Lok Sabha speaker P.A. Sangma on Saturday pinned hopes on support from the north east political leaders to help him reach the Raisina Hill. Addressing a press conference in Guwahati three days after filing nomination for the presidential post, Sangma said the he want to show the country wants a tribal leader in its helm. He further appealed to the political parties to favour him without any doubt or fear. He is confidence that he would win the presidential elections. He said that he has contested parliamentary elections nine times and legislative assembly elections twice and that he has no record of any defeat. Notably, he receives support from AGP, UDP, Hill State Peoples' Democratic Party of Meghalaya, Mizo National Front (MNF) of Mizoram.

25 Apr 2009 - 2:47pm | editor
A mild tremor jolted Assam and its neighbouring states on Saturday evening. The jot was felt at around 8-03 in the evening when the panic-stricken people in Guwahati came out to the streets. The epi... 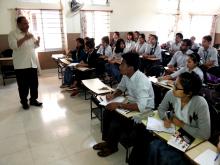 1 Apr 2016 - 10:14pm | CM Paul
A group of social work students of Assam Don Bosco University are having “an on-demand workshop on social analysis,” from 1st to 3rd April.The workshop is based on a new book entitled “Social...

27 Feb 2016 - 6:02pm | SK Hasan
Welcome gate to the historic Nazira Sub divison as been constructed and inaugurated at a public meeting on Friday. The gate was constructed with MLA development fund of Nazira ...