Following the historic signing of the Memorandum of Settlement between both the faction of DHD, government of India and Government of Assam on 8th in Delhi, the leaders of both the factions, well-wishers and supporters are celebrating this victorious event with great enthusiasm throughout the district.

On October 9, when Jewel Gorlosa with his team reached Haflong thousands of people accorded warm welcome to them. On October 10th, Dilip Nunisa, Chairman, DHD along with his colleague reached Haflong wherein all the DHD leaders, Dilip Nunisa, Pronob Nunisa, Yathong Dimasa, Nairing Daolagupu were accorded warm welcome by the thousands of people from all section of the society. They were also felicitated at various places on their way back from Guwahati to Haflong.

On the occasion of ‘home coming’ on October 11, the DHD held a general meeting with the senior citizen, representative from each and every tribe and community at District Library Auditorium. Representatives from most of the tribes like Jeme, Hmar, Kuki, Biate, Hrangkhol, Nepali, Bengali etc. were present in the meeting.

Sri Dilip Nunisa, addressing the huge gathering, disclosed that he could not, but brought this historic memorandum of settlement (MoS) from Delhi for all the people living in the district. ‘This would bring all round development of the people irrespective of caste, creed and religion through the proper implementation and decentralisation of power. No one would be deprived of their rights and dues’. But at the same, he reiterated their demand of separate ‘Dima Raji’ he said the demand of ‘Dima Raji’ would be continued democratically. It is not that with the signing of MoS, the struggle for the Dima Raji has stopped. He also disclosed that this peace accord has enough provision to preserve and protect the culture, language, tradition of all the tribes and communities living here since time immemorial. For the people outside the district would get development council through which all the development would be executed. By and large, this MoS would certainly bring development in the region if it was implemented properly, Nunisa opined.

Jhon Phoitong, Spokesperson of Hrangkhol Devan said they welcome this MoS wholeheartedly, since there is ample opportunity for the development and peace in the district following the historic signing of the MoS.

Marshal Newme from Jeme community also welcomes this peace accord which he believes to be a tool for the augmentation of development of all the people of this district.

Others are also of the opinion that though the Dima Hasao Autonomous Territorial Council was the fruit of DHD struggle but it would be shared by all the people as per their rights and dues. 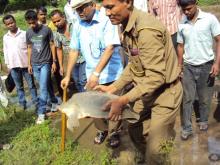 2 Jun 2011 - 5:17pm | mridulburagohain
A 10 kg weight tortoise recovered by Forest depertment workers at Demow with the help of Demow police from a household at Palengi under Sivasagar district June 1. Later the Tortoise was released...

13 Aug 2009 - 11:16am | Juthika Das
All Assam Karmachari Parishad protest against the enhancement of the Bhaskar Barua-led Assam Salary Commission for the second time. Protesting against the failure of the Commission and for the...

27 Feb 2018 - 8:41am | AT News
SHILLONG: Amid a massive security blanket voting begins in Meghalaya to elect 59 legislators in the 60 member assembly on Tuesday. Altogether 18.4 lakh voters are exercising their franchise at 3085...
Follow @Assam Times