Premiere of film on boat clinic

The Centre for North East Studies ad Policy Research (C-NES) announces the premiere of ‘Where there are no roads’, at  Jyoti Chitrabon Studio, Kalilipara, Guwahati, on May 24, 2013 at 6.00 pm.

Maulee Senapati is the Director and Cinematographer while Sanjoy Hazarika, Managing Trustee of C-NES and founder director of the Centre for NE Studies and Policy Research in Jamia Millia Islamia, is the producer and script-writer.

The film is about a unique experiment, a major innovative health campaign that reaches some of the most marginalized and poorest communities who live on hundreds of inaccessible islands, called saporis, on the river Brahmaputra. There are no roads here. But, over a dozen specially-designed boats, conceived and developed by C-NES and manned by doctors, nurses, lab technicians and pharmacists as well as crew, organizers and community workers reach more than ten lakh people, pulling them out of a deadly cycle of maternal and infant mortality, disease and poverty conditions which contrast dramatically with the overwhelming beauty of the place. C-NES is supported by the National Rural Health Mission (NRHM), to implement a project providing preventive and promotiove health services in the islands through specially designed boats.

30 Aug 2019 - 5:56pm | Shajid Khan
UDALGURI: A daylong workshop on “Choice Based Credit System” (CBCS) for Under graduate level was held at Tangla College recently. It was organized by Darrang-Udalguri Zone, Assam College Teachers... 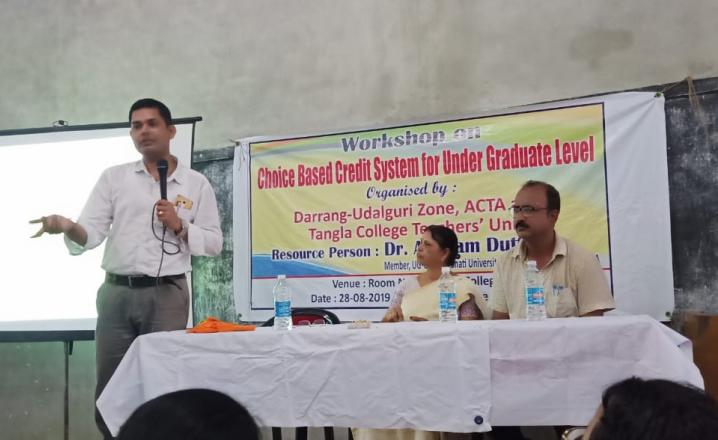