Police have arrested a Naga militant in connection with the recent killing of the irrigation engineer.           Identified as Ibung Kuame, the NSCN militant was held from a tiny hamlet on Sunday evening.           According to police, Kuame was one of the five militants who shot dead executive engineer Rajib Pathak at his chamber in Haflong.         He was arrested during a joint operation in the area. Security forces further seized 400 gm RDX along with a magzine, 200 bullets of AK series rifles, some detonator from his possession.

1 Dec 2013 - 12:10am | CM Paul
The first HIV/AIDS case in India was detected in 1986 and since then, HIV infections have been reported in all states and union territories. India has a low overall rate of infection, however,...

23 Feb 2014 - 10:10pm | AT News
Jintul Talukdar, BhawanipurIn a bizarre incident that sends shockwaves across the state, a woman committed suicide after killing her minor daughter on Sunday.The incident took place at Bhawanipur in... 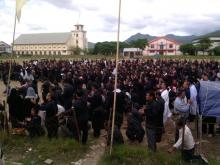 15 Sep 2015 - 9:05pm | Koruphun Tantanga
The All Tribal Students Union, Manipur has set September 30 deadline for tribal MLAs to quit in protest against the three controversial bills. In a critique issued on Tuesday, the student body...