Utpal Barua to interact with media

17 Sep 2009 - 2:58pm | editor
Eminent painter and Associate Professor of IIT Guwahati, Dr. Utpal Barua will interact with the media persons in the city tomorrow (September 18). During the hour-long programme, to be held in... 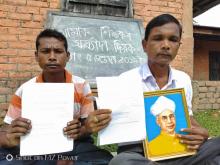 5 Sep 2019 - 12:06pm | AT Kokrajhar Bureau
Kokrajhar,Sep 5: "Even though 39 years passed rendering services in the schools,yet dream of provincialisation of the school remained far from reality. I don't know when the school is getting...