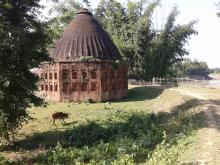 3 Mar 2015 - 5:03pm | SK Hasan
Continuous erosion caused by Dikhou river has now become a threat to the existence of the historic Gorokhiya Dol located in Nazira. The lackadaisical attitude of the concerned departments has left...

16 Jun 2012 - 3:03am | editor
Opposition BJP on Friday flayed the government for keeping the Cachar- Karimganj border porous resulting in largescale infiltration of anti-social elements. Talking to reporters after visiting some...