21 Jun 2007 - 3:18am | mousumi
The Jorhat Municipal Board got a new Chairman, Prasanta Bora. The post of the Chairman fell vacant when the previous incumbent, Mrs. Deepti Hazarika had to step down in view of stiff opposition by...

28 Feb 2017 - 2:31pm | AT News
Stunned by the BBC expose in the Kaziranga National Park, the National Tiger Conservation Authority has banned the British media in the country’s tiger forest with immediate effect.According to... 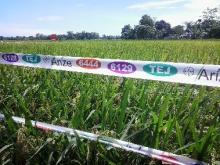 26 Jun 2013 - 10:35am | Nibirakash Baruah
Earning a livelihood through agriculture has never been easy in Assam. But, in a welcome departure from tradition, farmers of Sonertari village of Barpeta district have opted for multiple-cropping...