22 Aug 2012 - 9:21am | editor
The Railways announced an ex-gratia of Rs 15,000 each to the family of two passengers who died in the NJP incident where the victims were thrown out of a Guwahati bound train in West Bengal. The kin... 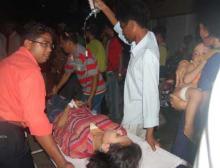 21 Sep 2008 - 2:36am | swapan
Creating panic among the common people, a bomb blasted in the Rang-ghar Chariali area, Sivsagar on today afternoon. According to the reports last came in, 10 people have been injured in the blast....

24 Apr 2014 - 6:46pm | AT News
Nagaon is again proud of a high turn out of voters in the final phase of Lok Sabha polls on Thursday. Counting will take place on May 16.  The turn out till the closing hour has crossed an...