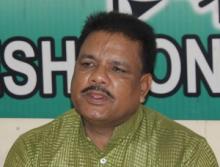 17 Jul 2014 - 9:42pm | Jintul Talukdar
Amid simmering dissidence within the Congress Legislative party, a senior party leader has slammed a section of ministers and MLAs for demanding removal of Tarun Gogoi as chief minister saying that...

15 Jul 2017 - 12:03pm | Shajid Khan
The high concentration of fluoride in ground water, which causes fluorosis, has already worried people living in 22 revenue villages of Udalguri district as per survey by the Public Health...

Delhi CM tweets for treatment of a dying tusker

20 May 2016 - 3:27pm | Jayanta Kumar Das
A badly injured eight years old wild tusker has been battling for life since May 18 at a remote village in India-Bhutan border in Udalguri district.The injured wild tusker had been very weak while...