In a major embarressent for Borkhola MLA Rumi Nath, police continues to grill her estrange husband Jacky Zakir along with her PSO a day after the duo were held for their  alleged link with a notorious car lifer.

Zakie was held from Karimganj while her PSO Debabrata Barpatra Gohainwas arrested from the Special Branch headquarters in Guwahati on Tuesday.

Zakir is being brought to Guwahati for thorough interrogation on Wednesday.

6 Jun 2017 - 2:11pm | AT News
A senior police team from Dibrugarh probing the multi crore APSC selection scam is preparing to interrogate over two dozen ACS,APS and allied service officers, a move that will brew more trouble in... 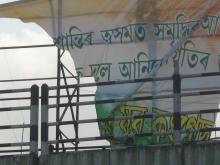