The performing artistes and media persons of Assam will play a friendly football match to generate funds for the flood affected families of the State. The charity match, scheduled for next Saturday (26 September 2015) at Nehru Stadium Guwahati and starting at 6 pm, will be played between Artistes Eleven and Media Eleven.

On the other hand, senior journalist Pranay Bordoloi will lead the media team, which has been initiated by the Electronic Media Forum Assam with the inclusion of journalists from both the print and electronic media. The practice session has been organized at Nehru Stadium from Tuesday onward in the morning hours (around 7 am), where the aspirant players from the media houses are requested to join and help the organizers to select the ideal team.

The city based Dispur Hospitals will extend the emergency medical supports to the players. Meanwhile, the State based artists and technician’s forum has urged everyone to contribute financial aid for thousands of flood affected families in Assam through Kalaguru Artiste Foundation (ICICI Bank, Ganeshguri branch, Account no: 215101000145, IFSC code: ICICI0002151).

8 Apr 2013 - 1:26pm | Dr. Sashanka S. Dutta
A traditional Assamese Gamocha hits world record after it was displayed in Delhi on Monday. The Gamocha-like-1.5-kilometer-long handwoven cloth was displayed at a function at 11 in the morning at...

30 Nov 2017 - 11:38am | AT News
NEW DELHI: In a major setback from the NDA the Supreme Court on Thursday straightly rejected the Centre's petition seeking extension of the deadline to publish the NRC draft. A division bench of the... 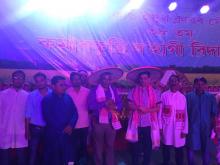 Human compassion on the edge of surgeon’s knife

18 May 2016 - 7:26pm | Pranab Kumar Gogoi
He is no longer among his near and dear ones. Even his motherland does not beckon him. But in heart and soul, he still loves Assam where he was born and brought up. Yes, we are talking of Dr Sushil...